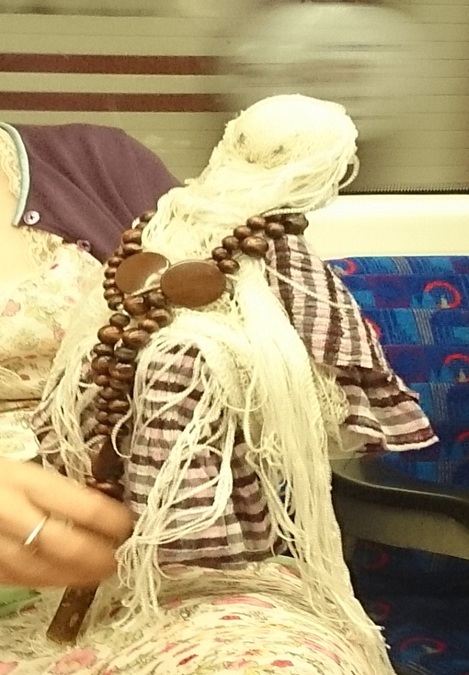 It was the evening before I travelled to Georgia. Hot and humid, the underground was unbearable so I was glad to walk to Russell Square along tree-lined avenues. Other Georgiophiles soon arrived at the Embassy. We were all women apart from one man, who apologised for his interest. I was surprised. After all, the kinds of rituals we were exploring were ancient and albeit within the domain of women historically, the fascination for such natural magic did not preclude any gender bias. This workshop explored how ancient female Georgian ritual changed the weather.

I felt in safe hands.

There were some titans at this event. Women of academic note and with a longstanding interest and involvement in Georgia filled the space and the air fizzed. This event was the first of its kind. Usually, people come to workshops that focus on Georgian wine and food, or song and dance, but these experiences never really scratch the surface of a culture based on a deep and ancient female divine. There is a growing interest too, in the previously denied voices of women and their ancient natural magic. Normally, guide books never get beyond Tamar – the Queen of Georgia from 1184 – 1213 who was so successful she is referred to as ‘King’ Tamar, or ‘King’ Rusudan, the daughter of Tamar.

Travel writing also usually exhorts the nobility of the male voice choir as well as the very male tradition of the ‘supra’ which continues to guide the interest into Georgian Culture. In my opinion, this is because Georgian society in itself is essentially geared up to support the patriarchal elite and many people are, of course, led by the opinions of popularist writers.

The rituals, the song and the dance we learnt that evening were designed to change the weather, and I was praying for rain. It was stifling. The rituals were compelling and fascinating but was especially impressive was the making of the Gonja doll. Going home on the tube afterwards, a fellow traveller asked if it was a voodoo doll! Mind you, this was after he also gave a dismissive wave of his hand to my Georgian female companions who protested loudly and vociferously after he stated that he knew that Georgia was actually and definitely part of Russia. If there is one sure fire way to insult a Georgian – that would be the way to do it.

As we were making the Gonja doll it got hotter and hotter. The windows were wide open but still there was no air and the deep red wine we were drinking did little to satisfy my thirst.

So, what is a Gonja doll? It is a special doll made specifically for a particular ritual and is made out of things easily found either in the natural world or in the home.

Keti showed us two sticks she had cut from one of her rose bushes. One short. One long. She had already cut a notch into the wood so that they joined together easily. She then tied them together to make the shape of a cross. With slightly dropping ‘arms’ the ‘cross’ reminded me of the ‘drooping crosses’ I often see in Georgia and which are associated with St. Nino.

Georgian songs often interweave the sentiment of the pre-Christian Nana, a Mesopotamian Moon God of wisdom and motherhood, with the Christian St. Nino, who was instrumental in converting the Pagan Queen and King of Georgia to Christianity in the 3rd Century.

Echoes of Nana’s spirit can still be heard in the ancient songs and language and seen in the rituals and symbolisms of many cultures even today so strong was the cult of the moon-goddess. 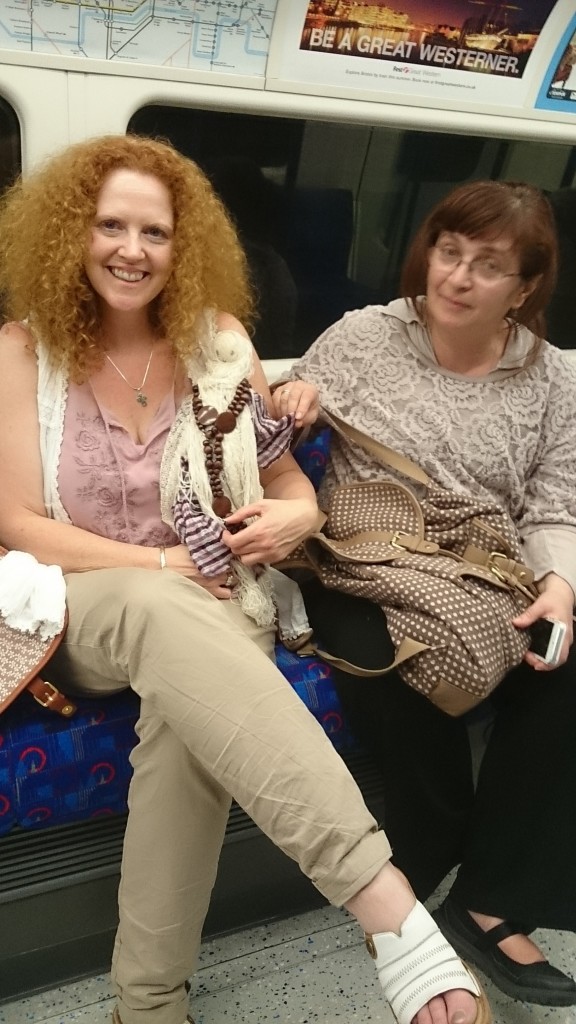 The doll came to life under Keti’s hands. She fastened, first by impaling, then by tying with string, a head that had been made from a cleaning cloth, onto the top of the wooden cross.

Then came the layers of material. These had swags and lace and jaunty undulations and the doll soon took on the appearance of a plump, well dressed lady. The doll did not have to be a woman but for the purposes of this ritual, it was.

The layers were pinched in at the middle to create the illusion of a waist and then a white lace headscarf was added. With much looping, a turban-like hat was made that had copious layers of frothy veil hanging down the back and over the shoulders. Finally a wooden beaded necklace was added and a face was drawn on – in this case just two crosses for the eyes with a straight stern line for the mouth.

We learnt the song, ‘Lazare’ which is from Kartli, a central-eastern region of Georgia and which incorporates the capital of Tbilisi. Taught by the talented and dedicated Nana Mzhavanadze, a visiting ethnomusicologist (her voice already tired from weeks of giving more traditional workshops but enlivened by the enthusiasm of the group) the three parts soon blended to create the most exquisite sound, as the different threads of our voices came together.

Nana taught us the dance that went with the song too, and it was at this point, everything seemed to start bubbling and moving, cooking and shifting.

Our single man, fascinated and deeply respectful of what was going on, offered to stand outside of the circle and not take part in the ritual procession but continue to sing. He was met with polite protests but, as he said, he felt the flow of the women’s connection ought not to be broken and him separating himself from the group was, retrospectively, the right decision.

We processed, as the ritual commanded, in bare feet, around the space, singing the first part of ‘Lazare’. The heat and humidity was oppressive, but as we moved, carrying the Gonja, there was a rumble of thunder from outside and a cool, cool breeze fanned us and the air shifted as our voices took on a natural powerful sound that wove through the air pockets that eddied and scurried between us. Finishing our procession, and in my mind, having passed through the village collecting gifts to add to the ritual, we headed towards a river. Once there, we put the Gonja in the middle of our newly formed circle and circle- danced in homage to the goddesses of the past.

Spirits of the ancient world seemed to join us and the rain began to fall and patter making the
pavements steam. I could see us all transcending time, travelling through the village, placing the doll in the water along with our wishes and dreams, our heart beats and our song. The ancient timeless rhythms connected us to the earth. Lazare and Elijah watched over us, each waiting for their cue to bring lightening, rain and thunder and they, those male saints who had slipped into the place of their ancient mother watched, smiling, forgave our folly and beliefs in the old ways, indulged us and blessed us.

We finished as the hot rain soothed the pathways and streets and everything eventually cooled down. Was it a coincidence?

To celebrate our success we shared the traditional dish of Khachapuri – a simple
flour and cheese bread made from the ingredients that would have been collected by the women as they passed through the village on their journey to the water.

This time I drank deeply from the blood red wine that now nourished me and quenched my thirst where it had not done so before, and it felt strangely satisfying. 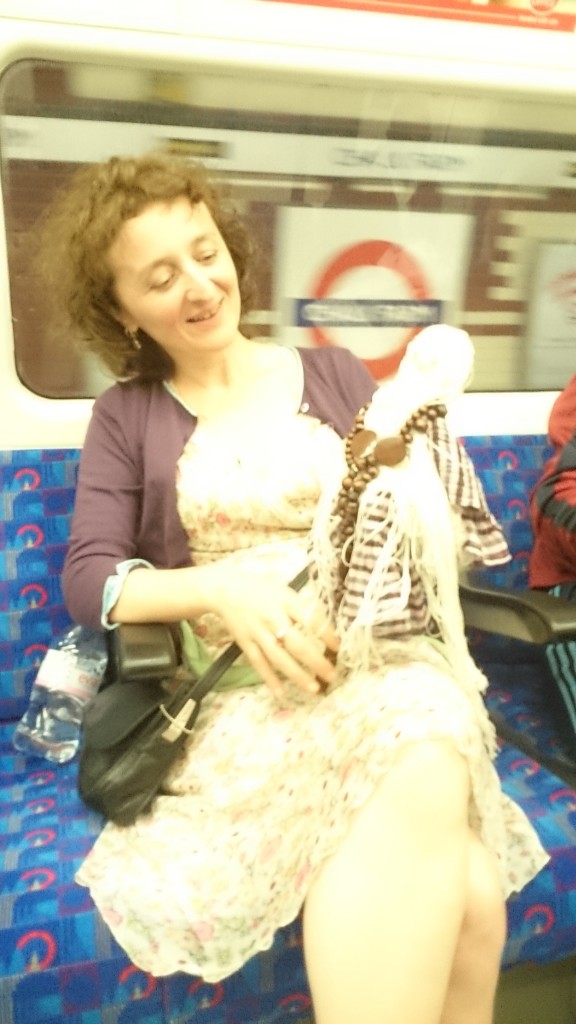 Nana Mzhavanadze on the Underground

Nana sings to the Water

Bring with you
Water for our drought.

See our feet, look how dirty they are
See how they tread the fertile land that groans.
See how grain splits and pulses.

Bless our dolls, our Gonja.

We made them for you from
Cotton from your fields,
Sticks from your trees,
Beads and Cowrie from your mountains that
Once sat at Nana’s hearth.

See, we will return them to your rivers
We will stand and sing to you, we will sing your songs to the water.

We will sing and
Your grace
Will turn famine to feast and fill all our bellies.

Water Goddess
Hear our song.
Let it float, fuse
Your rushing torrents, swirl powerful eddies
And dance to our song, to our dream, to our
Wisdom.

To you our all, our Nana.